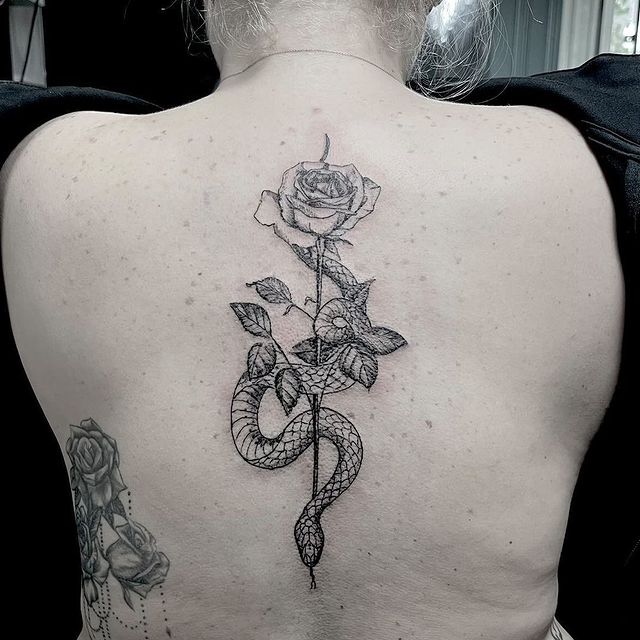 Have you ever thought the snake and rose tattoo is nothing more than decoration? Well, I’m here to tell you otherwise. There is a story behind it that’s both beautiful and touching. So let’s take a look at this gorgeous tattoo design!

The snake and rose tattoo designs are very popular among young adults not only because of its romantic significance, but also for its symbolism of danger. It’s commonly associated with love and lust, and it is also a symbol for passion and evil temptation.

There are a lot of people who get this design because of their personalities (or the one they want to portray). This tattoo is said to be the perfect combination between being beautiful and dangerous.

The snake in our culture is always related to evil things, but that’s not true for all snakes. Most of the snakes are symbols of good luck, as well as protective deities for home and tribe.

The rose is a symbol of beauty and youth, as well as of love and affection. Rose bushes are a source of rebirth and new life.

So what does these two symbols combined mean ?

1) blinding passion, temptation that lead to corruption : The snake and rose tattoos together can symbolize a relationship between a man and a woman – the snake represents the man and the rose represents the woman. They have an alluring attraction to each other, but their opposing natures are what that makes them perfect for each other. The snake is drawn to the rose for her beauty, and he wants her to be with her forever. But what he doesn’t know is that she’s going to corrupt him in to being something beautiful too (even though it will be ugly in his perspective).

2) An attraction, but also a danger: The snake and rose tattoos are symbols of two different things, but they are also dangerous. They are both beautiful and dangerous at the same time, and when they touch, they start to corrupt the soul of each other.

3) Sexual desire : The snake and rose tattoos together can mean that a man or a woman is wearing the tattoo because he/she is attracted to someone else. The snake represents the man and the rose represents the woman. They are both drawn to each other, but they should not be together because they are complete opposites.