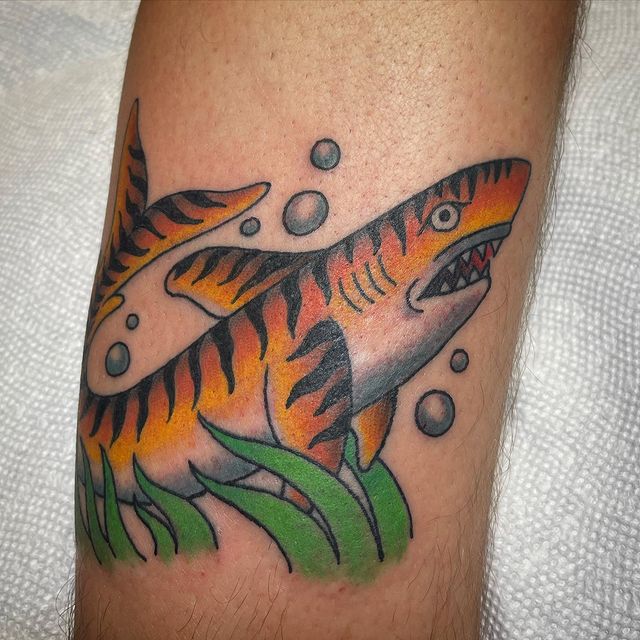 Disclaimer :The meaning of tigershark tattoos (or any other tattoo design) depends largely on the individual’s perception.

Some people associate sharks with danger, while others feel that they symbolize power, tenacity, and honor. As for a tiger shark tattoo, it is seen as strength and protection from harm because tigers are also considered dangerous animals. Others view tigersharks as symbols of honor because tigers are ferocious and can defend themselves from threats.

Sadly enough, however, the association of sharks with danger is also true because tiger sharks have been known to attack or kill humans. So if you choose to have a tattoo of this creature, it better be for a good reason. Not only that, but like all tattoos, you will have to be prepared for people looking askance at it so unless you want the attention it is best to refrain from getting one.

The tiger shark is the fourth largest of all the common sharks and is regarded as an apex predator because it feeds on many other species. People who get tattooed with this creature believe that they have the abilities to handle almost any situation.

Normally, a large muscular arm is most commonly tattooed with a tiger shark because it will represent strength and prowess.

The animal needs frequent feeding and if it goes for more than eight weeks without eating, it will die.

They normally eat seals, sea lions, fish, turtles and even other sharks.

This is why people who have this kind of tattoo are never afraid to take on challenges, regardless of their nature.

The tiger shark is also often associated with courage and bravery because it can defend itself from threats. People who choose to get a shark tattoo are those that seek adventure and that aren’t afraid of the unknown.
They believe in facing each day head-on no matter how difficult the situation may be.

The tiger shark is also a symbol of solitude because it is believed that they live alone in the ocean. Some even believe that the only reason why they are able to survive and thrive is by swimming alone. So if you want to keep to yourself, this tattoo would be a good choice.

Usually found in temperate and tropical oceans, the tiger shark is typically a loner that hunts at night.

Sharks are also sometimes associated with fear and solitude because people fear what they don’t understand.

Now that you know the different meanings of this particular creature, it is time to choose or design a tattoo of your own. When choosing a design, remember that the best tattoos are those that have personal meaning to you. So if you want it for power and dominance, choose an image that represents strength like a warrior or a warrior princess, for instance.

If you are thinking about getting a tattoo of a tiger shark, it is also important to consider the placement of the tattoo.

As mentioned above, a large muscular arm is the most common location for this kind of tattoo.

The reason for this is that people believe that tigersharks are powerful and this represents strength. The tiger shark tattoo also symbolizes courage and power because they are not afraid to take on any challenges or threats that may present themselves in the future.

This tattoo represents nature law, the hunter and the hunted.

The meaning of your tattoo depends on your perception and life experiences. Choose one that reflects how you would like to be seen by others.

Tigershark tattoos can symbolize many things and they range from a personal meaning to a sense of belonging to a greater community of people who share the same outlook on life.